The vegetation of the Tiwi Islands includes open eucalyptus forest and woodlands, Punkaringa Melaleuca (paperbark) forest, monsoon rainforest, Acacia shrublands, treeless plains, freshwater swamps, sedgelands, grasslands, mangroves, coastal dunes and saltmarsh. Tall forests dominated by Jukwartirringa Eucalyptus tetrodonta (Stringybark), Timirraringa Eucalyptus miniata (Woollybutt) and Wurringilaka Corymbia nesophila (Melville Island Bloodwood) cover about 75 per cent of the islands and include the best developed eucalypt forests in the Northern Territory. There are a large number of monsoon rainforest patches on the islands, supporting a unique diversity of species including many of the plants endemic to the Tiwi Islands.

Scientists have recorded at least 1200 native plant taxa on the Tiwi Islands. Eleven plant species have been recorded in the world only on the Tiwi Islands, and a further 17 are known in the NT only from the Tiwi Islands (but also occur beyond the NT, mostly in north Queensland, New Guinea, Indonesia and the Philippines). Ten monsoon rainforests on the islands are listed on the Register of the National Estate for their natural values, including: Big Pig Jungle, IIinga Jungle, Hanguana Jungle, Gully Gully Jungle, Taracumbi Creek Jungle, Jump Up Jungles, Imanawudi Jungle, Third Spring Jungle, East Tjipripu Spring Jungle and Mangkipp Jungle.

A total of nineteen Tiwi plant species are listed as threatened. An additional 36 plant species have been listed as ‘Near Threatened’ and 41 as ‘Data Deficient under the Territory Parks and Wildlife Conservation Act, and many of the latter are likely to qualify as threatened in future reviews of their conservation status. The main factors affecting listed threatened plants are feral animals, changes in water flows, changes in fire regimes, weeds, and land clearing. The Bio-Physical Resources of North East Bathurst Island - Technical Report has further information about threatened and significant plants on the Tiwi Islands.

At least 200 native plants are used traditionally by Tiwi people for food, in art and as construction material.  Most of these plants are associated with rainforest and eucalypt open forests. 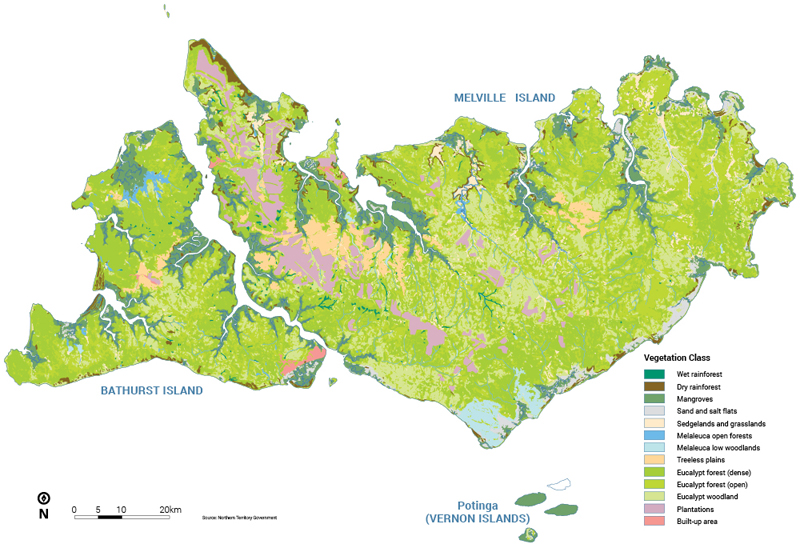